What is your current position, and what do you find the most fulfilling about it? 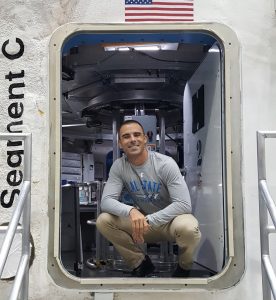 I am currently an Assistant Professor of Psychology at California State University – San Bernardino, and Director of its EEG Research Laboratory. What is most fulfilling is the opportunity to work closely with students, having the chance to share with them the excitement of scientific exploration & discovery in the human mind and brain.  Mentoring students is incredibly rewarding, and a chance to pay forward the similar impact that I received from Drs. Leynes and Martinetti while as a first-generation student at TCNJ.

Can you describe your path from TCNJ to your current position as an Assistant Professor? What steps and career moves got you where you are today?

After TCNJ, I worked for a year as the head coach of Robbinsville High School’s wrestling team, which was in its first year as a school and inaugural year as a team. Buoyed by the team’s success, I did a stint on a solo trip to Mt. Kilimanjaro’s peak that nearly killed me due to high altitude cerebral edema and pulmonary edema, I knew it was time to really focus on studying the brain since mine had just been spared. I began graduate school at the UC Davis Neuroscience Program, and really fell in love with everything neuro.  We learned the human brain from genes to cells to systems and cognition, and were taught by an all-star cast of scientists. At the same time, I learned a new sport of triathlons, which from the swimming led to courses in the UC Davis Research Diving program, where they trained us to be professional scientific research divers via rescue and master diving. It turned out that my dive buddy was a pilot (and now an Air Force PJ) who taught me how a broke student can work hour by hour to get a pilots license while riding a bicycle instead of driving a car. When UCD alumni and NASA Astronaut Tracy Caldwell visited amid the 2008 application cycle, she inspired me to take up the pilot training and apply. I was easily rejected. 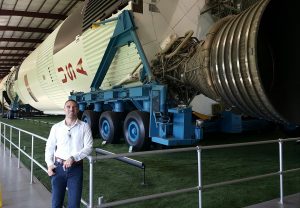 Working on the dissertation, the APA awarded a Pre-doctoral Diversity Fellowship, and I pursued extra courses at Woods Hole Laboratory & Cold Spring Harbor Labs. At UC Davis, we published some interesting discoveries, I moved on to a post-doc using fMRI at UT-Southwestern Med School, then began teaching at UT-Dallas for a few years, and ended up making a big discovery about non-conscious memory that proved a major textbook dogma to be wrong. Since 1957, everyone always thought that a brain area called the hippocampus only did conscious memory but not non-conscious memory, as had been noted prominently in Nobel Prize winner Eric Kandel’s leading textbook; my EEG data on hippocampal amnesics ended up proving this wrong, and so was really exciting and has already been added to a few newer textbooks. I applied again to NASA’s astronaut program in 2016, and got a bit closer but rejected still.  I went on to a tenure-track job, where I now run my own lab at Cal State, teach classes, and get to continue teaching neuroscience and psychology research to students, just like Dr. Leynes did for me at TCNJ!  When I saw the NASA HERA mission (which is a huge psychology study) was accepting applicants, I applied. I didn’t hear much for a while, so spent time building the lab, designing new experiments, writing grants, working on instrument flying, and training students. NASA ended up calling to interview and do some tests, so I visited JSC, then came back to work.   One of the grants ended up sending me to Grenada to work on a sailing ship doing marine biological conservation research on leatherback turtles and decompression diving at St. George University; it was while coming back from a 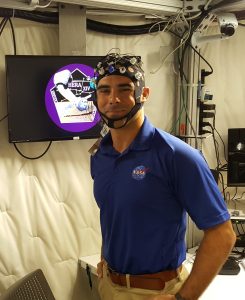 dive on a shipwreck that NASA emailed to offer the position to join the crew on HERA XIV. 10 days later, I was in Houston.

The training was hard, fast, and tough, but Mission Control’s training staff was fantastic and kept us on track training in the scientific research of psychology, neuroscience, EEG like we did in Dr. Leynes’ TCNJ lab (and my lab now too), microbiology, engineering, virtual space walks, and flight simulators. The team bonded quickly, and before we knew it we were ingress into the space capsule (we even brought Wilson with us, to aid the isolation confinement). Just like working in the NJ shore in college, I was operating out of my backpack again, working long double shifts with a small team of great people, and sleeping in an area about the size of my car. We worked the mission for several weeks of long days and sleep deprivation. However, Houston had a problem: Hurricane Harvey soon arrived, bringing with it tornadoes, hurricane winds, and destruction from biblical flooding. Mission Control was superb in calmly guiding us out in an emergency evacuation, without the slightest hint of panic, in the most professional manner possible that conferred absolute confidence in their safety and protection. Within a week we were on the first available flights out, eventually re-integrating back into regular life teaching psychology at Cal State. It’s been a really a great journey with some amazing people, and am very grateful for all the lessons learned from them along the way.

What was the most valuable lesson you learned while at TCNJ? 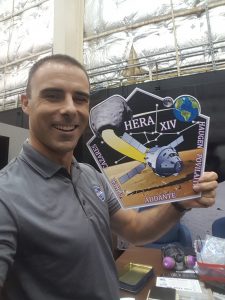 Good question. It’s tough to single out any one lesson as most valuable. I learned so much from TCNJ, and all of it has been valuable in one way or another.

I was a walk-on athlete and a back-up on the TCNJ wrestling team, so for the first time in my life I was not the Captain, or the leader, or the “best” on my team. In fact, I started off as the worst. When I started doing well later on, I got hit by a car at 50 mph, and had to revert to a backup position again to help the team in other ways. So, a really important lesson I learned while at TCNJ was how to become a supporting role to the team, dispense with one’s ego, and be a team player that is there to serve the success of others: be there for them, learn to be a good follower in a supporting role as a backup.  You still train to win, and must be ready to be put in the match at any time to help the team.  That experience and attitude helped me at NASA as initially selected to be a backup crew member supporting the prime crew, before having to step in on short notice for the mission.

What is your favorite memory from your time at TCNJ?

When I finally graduated, I became the first in the family to ever graduate college. Being raised as the oldest of 6 kids by a single mom, it was also the event in which it was the first time that all of my siblings, together with our mom, and grand-parents, had ever all finally been together in the same place and time. It was a really emotional and meaningful day for us, and the unity made all of the hard work worth it.

What advice can you give to current students at TCNJ? 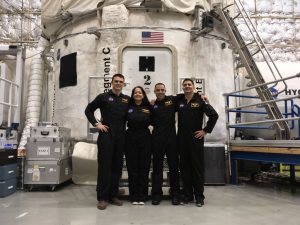 Another really good question. I’m not sure I have any good advice for current students to distill in one simple message, so here’s a few pieces:

Have a good attitude, be a selfless teammate, and maintain a positive mindset.  To be a good team mate: that means being more patient, more kind, more tolerant, and more understanding. Avoid the toxic team killers of snark, selfishness, complaining, politics, and negative attitudes. Use less Facebook & twitter, and use more books & real conversation with people. Be OK not getting your way at times. Try to get just 1% better each day. Be relentlessly happy, do not let small frustrations get the best of you, and practice using good communication, saying the words “I’m sorry” when needed; talk less, listen more, think more, do more. See all things -no matter how difficult- as opportunities instead of obligations. Have faith.  Have the courage to do the Right Thing.  Never, ever quit. Have the grit, determination, and perseverance to be patient and not panic when things get tough.  Always find the best in a situation, find reasons to smile, ways to laugh, and opportunities to serve the other members on your team.

While “who you know” does matter, it won’t matter much at all if you haven’t also mastered the “what you know.” Work hard to Know your stuff, and do it well.